I came across something of interest, it “can” earn passive income, and, so, I thought I’d share…

I like “FREE” as much as the next guy and gal, so …who am I to pass up on “FREE” BitCoins? So, OK, I clicked, and …apparently, I am earning Free BitCoins online every time I click this “roll” link. And, if I continue to build up my account up to a certain amount, I’ll begin earning interest!  …Interesting. If this is legit, this “could” turn into quite something… Free is good, …but, what is the real cost?

The Intro To BitCoins

I do admit, I was not a fan of BitCoins when they first became available. I remember thinking, yeah right, another gimmick that won’t last and you’re risking whatever assets you may “invest” or build up because I’m more than sure there will be people trying to hack or game the system… so, you’ll risk losing your principal and whatever interest you accrue, etc. And, since I am not an early adopter anyway, of course, I didn’t jump on the bandwagon. I usually do take the “wait and see” approach, especially when it comes to health and money, and this was no different. So, I figured I wouldn’t participate – at least not for now. Well, …here it is a few years later, and they are not only still around, “BitCoins” have taken hold.

Here’s a quick little video explaining what BitCoins are, how they’re stored, and how they’re used.

Bitcoin is, basically, a cryptocurrency, and it was created by a software programmer who used the name Satoshi Nakamoto. The first BitCoin that came into “existence” was in January of 2009 when its creator “mined” 50 BitCoins. Its value at that time was zero, and the value remained below a dollar for quite some time. By 2010, it’s value was still only .39 cents. However, fast forward to today, and the value of each BitCoin is now worth $5,582.63 – at the time of this writing. And, of course, now I’m kicking myself for not being an early adopter… But, I digress… 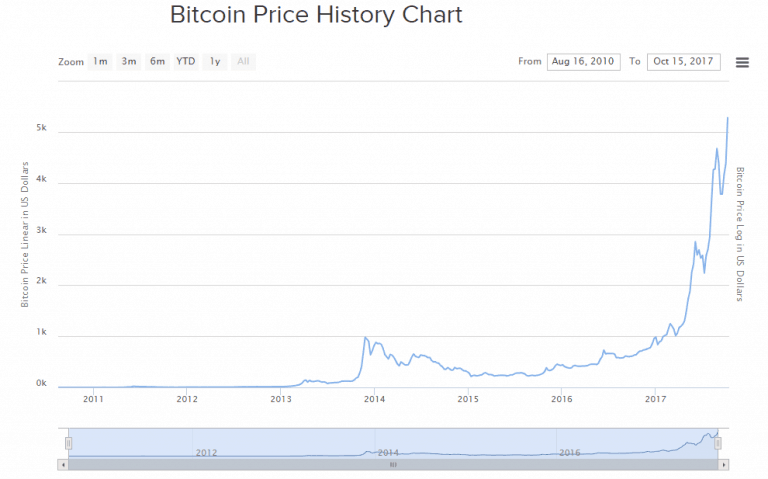 The Pros and the argument in favor of BitCoin is, well, lucrative, as you can see from the chart above. But, as in anything, all “pros” also have “cons,” and the major “cons” will be discussed below.

The Major Negatives of BitCoin

In the early days of BitCoin, there were (and still are) people called “miners” who would work or solve a computational problem in order to “earn” BitCoins. Also, since this is a currency created and solely supported by math computations, there can only be 21 Million BitCoins created – at least if it remains true to its original computation anyway. That’s all well and fine, but seriously, the most important thing you should know about BitCoins, is that if you do ever acquire them, you “MUST” keep your BitCoin keys both safe and available because there is no way to access your assets if the keys are ever lost, hacked, or stolen in some way and the owner cannot verify his or herself as the true owner before the compromised Bitcoins are spent. In other words, if your private keys are compromised in any way, all your BitCoins and their associated value can just go “poof.”

In reading about this currency, there are obvious pitfalls to building up this asset. And, while there are numerous articles already written about BitCoin, I do wonder whether the original computation has taken into account the fact that many people will lose access to their digital currency due to various reasons. For instance, there are those who will purchase or work toward obtaining BitCoins and then, basically, forget about them. There are those who may just lose their BitCoin Keys, passwords and any way to verify the account as theirs. There are also people who may pass away thus leaving their BitCoins forever in limbo because they were never bequeathed or addressed in any Will. Relatives or those who “could have” inherited these assets may not even know about whatever the deceases had acquired, but one thing is for sure, these “lost” BitCoins will never be re-circulated and will, consequently, be taken out of the available 21 Million BitCoin pool. So, upon reading this about BitCoins, I do wonder if the original programmer did take into account all the things that “may” happen that will affect both supply and demand and, ultimately, the value. Yes, of course, the value would rise, but on the other hand, there will be people who may get a little hot under the collar if they simply lost their “Private Keys” or if relatives cannot find “the keys” and cannot access what they think is rightfully theirs. And, seriously, who could blame them?  …I certainly do see lawsuits!  But, whether they are successful… is another matter entirely.

“A private key in the context of Bitcoin is a secret number that allows bitcoins to be spent. Every Bitcoin wallet contains one or more private keys, which are saved in the wallet file. … Because the private key is the “ticket” that allows someone to spend bitcoins, it is important that these are kept secure.” Aug 10, 2017  Source: Private key – Bitcoin Wiki
https://en.bitcoin.it/wiki/Private_key

Here’s a very good article written about BitCoin Keys and the importance of your Private Key: Six Things Bitcoin Users Should Know About Private Keys.

OK, But… How Do I Get BitCoins For FREE?

But, getting back to the specific topic at hand, here’s a quick list of some of the FREE methods people can use to acquire BitCoin.

These are just six of the many sites I’ve come across. In fact, and in doing some research for this post, there is a multitude of sites to visit and even more available via apps that you can install on your phone to either watch ads, review websites, conduct tasks, and even to play games – all of which allow you to acquire BitCoins for free. I had no idea there were so many, in fact, there are just too many to list. So, I will wind this down by sharing yet another good article that lists even more Freebie BitCoin paying sites: Five Ways to Get Free BitCoins.

The True Cost of Getting BitCoin For Free

I guess it all comes down to you and whether you have the time. You will need to determine – what is your opportunity cost? Although these are just a few of the “free” methods to acquire BitCoin, there is the cost of your time spent watching videos, ads, reviewing sites, listening to music, and whatever else these sites are requesting in exchange for incremental amounts of BitCoins. So, yes, they are “free,” but there is a cost, and the bottom line is whether you want to spend that time. Only you can answer the question – “what is your time worth?” (…sounds like a good title for a future post!)

For me, I chose the first one that’s listed – FreeBitCo.in. Since I am working now from home, and I’m on the computer either writing, reviewing products, mentoring via Wealthy Affiliate, providing Marketing Services via ABS, or whatever else I may be doing online, this is the least intrusive method that I have found when considering my time. The payout may not be as much as GrindABuck, but, that’s OK. All I have to do is click a link after 60 minutes, and I’m building BitCoin assets – passive income – for free.  And, as mentioned, I like free.