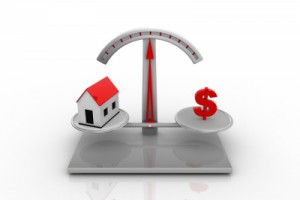 What better topic to write about today than a good old fashioned confrontation. In this case, the issue is regarding a neighborhood eye sore, and the owner’s complete and utter disregard for the local city ordinances, neighbors and the value of neighboring homes. In this instance, the property “in question” is right across the street from my own mother’s property. …And, who am I to shrink from a confrontation…  🙂

This picture, on the left, is how the subject property appeared until it sold on August 7, 2007, to its current owner. In this real life example, I am specifically writing about a two family with an already approved driveway, to the right of the home, which, according to the local City Government, is more than adequate to accommodate two cars per unit. Since this is a two family, this means two cars per unit plus two units equals a total of four parking spaces – in case anyone’s wondering. The current (legal and existing) driveway, therefore, adequately accommodates four cars – and then some.

This picture, on the right, shows what this same property looked like shortly after it was sold. 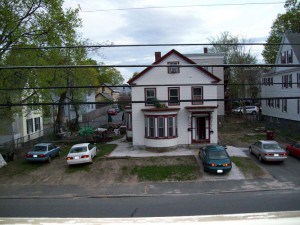 Gone are the bushes, the front fence, the green grass, and the pretty trees. At this point, it was transformed into a dirt parking lot while the surrounding homes began to lose their value – through no fault of their owners.

After seven years of complaints to the City, this non-occupied owner recently applied for a variance. He now wanted the concrete he had poured in the front of his house to be approved as additional parking space. This is in addition to other “parking area” that he poured previously. And, I, of course, had a problem with that. 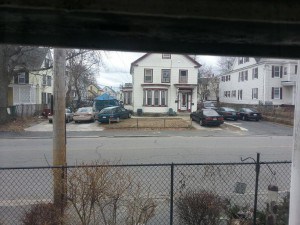 So, after my mother was notified of his application for a variance, my mom and I prepared for the meeting.  🙂  As mentioned, this issue is not new. This issue has been an ongoing issue for seven years now – and running. But, as mentioned, he applied for a variance approval of one (or both) of his two illegal driveways, and we had to respond.

So, off we went! My mom and I attended the variance meeting, and when the call for those “opposed” was finally issued, I sprang up, as both a daughter and a Real Estate Broker, to defend my mother, the family house, and its value.

I outlined the reasons why this needed to be denied, and they are as follows:

I furthered our opposition by having the City’s legal representative define what the City deemed was adequate parking – two parking spots per unit – right then, during the meeting. It’s on the “official record.” So, by the City’s own definition, having any additional space dedicated for additional parking was unnecessary.

Improper Use of Land:

If you own property, and you don’t pay attention to any notices from the City, or don’t care to attend any variance meetings, you could permanently lose value in your property. Property owners, whether they own single family homes or multi-family homes, should always pay attention to what their neighbors are doing, and they should be prepared to fight – if need be. Your home’s value hangs in the balance, and it depends on you to protect it!

So, that’s my post for the day. Oh, and if you’re wondering how our meeting turned out, well, OK, I’ll tell you. …The variance was, thankfully, denied.