One billion hours of video.

Another amazing thing about YouTube is the amount of time users spend on it.

Believe it or not, the average YouTube session is 40 minutes. Here are a few other ridiculous stats that demonstrate YouTube’s potency: But here’s what I find really interesting.

Only 9% of US small businesses have a YouTube channel.

That’s kind of crazy if you think about it. You would think more brands would be taking advantage of it.

But this is a good thing and means that YouTube offers plenty of opportunity.

You just have to seize that opportunity.

But how do you go about building a YouTube brand?

Furthermore, what are some of the similarities among top YouTube channels?

I’ve developed some sort of a template, and following it will help you build a successful, unbreakable YouTube brand that’s distinctly your own.

Come up with a unique angle

One of the most popular channels of all time is Epic Rap Battles of History (ERB).

They’ve featured rap battles that range all the way from Steve Jobs vs. Bill Gates: ERB has completely killed it and has a massive following.

They had well over 14 million subscribers as of mid-2017.

I’m not saying you have to be as original as ERB, but you definitely need a unique angle.

To decide on an angle, you have to first identify your core audience.

Would they go for humor and sarcasm?

A lot of the top channels implement humor to some extent.

YouTube is also a place where people openly embrace their weirdness, so it’s generally okay to be a little out there.

Or should you be professional and go for an educational angle?

It depends on your demographic and its collective taste.

I recommend doing some brainstorming to decide on a basic direction to take.

Of course, this will evolve organically over time, but you’ll need to establish a core identity and preferably one that stands out.

Also keep in mind that most people use YouTube for one of two reasons.

They either want to be entertained or informed, and in some cases both.

Make sure you have a mission and a clear idea of the direction you’re going to take right from the start.

There’s a path that most YouTube users take when learning about a brand or channel. They’ll watch it, and if they like it enough to want to learn more about you, they’ll click on the link to your home profile. Your home video will automatically play there.

This will basically make you or break you in terms of gaining subscribers.

Either they’ll be compelled to subscribe to your channel, or they’ll head elsewhere.

So, you need to completely crush it with your home video.

More specifically, it needs to encapsulate what your brand and channel are all about.

There are a few ways to approach this.

Whatever approach you take, just be sure you connect the dots for first-time viewers so they know what to expect if they subscribe.

Make full use of the About section

Every YouTube channel has an About section that explains the concept of the channel.

Many first-time viewers will check this out to learn more about you.

The information you include in this section will influence whether or not they choose to subscribe.

Don’t haphazardly or carelessly fill out this section.

You want to explain the details and highlight any points potential subscribers should know.

Here’s a good example of a rock solid About section from Fine Brothers Entertainment: Notice that it gives a clear, succinct description and also mentions the posting schedule.

Here’s another good example from The Needle Drop, one of the most popular music review channels:

This is yet another opportunity to build a homogeneous brand identity and pique the interest of those unfamiliar with you.

Don’t overlook the About section.

“It takes five to seven impressions for someone to remember a brand.”

In order to make your brand both recognizable and memorable, it’s super important to have consistency on your channel.

There are two main ways to accomplish this.

First, your channel should feature recurring characters and themes.

You want to become familiar to your audience to build connections with them over time.

Second, you should strive to stick with a consistent posting schedule.

In order to keep your audience interested and dialed in, you should give them a rough idea of when they can expect new content.

I know I get a little irked and lose interest in channels that go MIA all of a sudden.

However, two or three videos is even better.

I find the one to three video mark tends to be ideal.

In terms of the best time to post, there’s an article from Tube Filter that offers some good advice on this.

According to their research, these are the best hours to post a video each day: And this makes sense if you think about it.

This makes the weekend the ideal time for viewing.

Plus, people can be stealth about checking most of their social sites at work, but YouTube is trickier.

Usually, they’ll need to wait until they’re off work to indulge.

Keep this in mind when establishing a posting schedule for your videos.

Live streaming is a fairly new concept on YouTube. 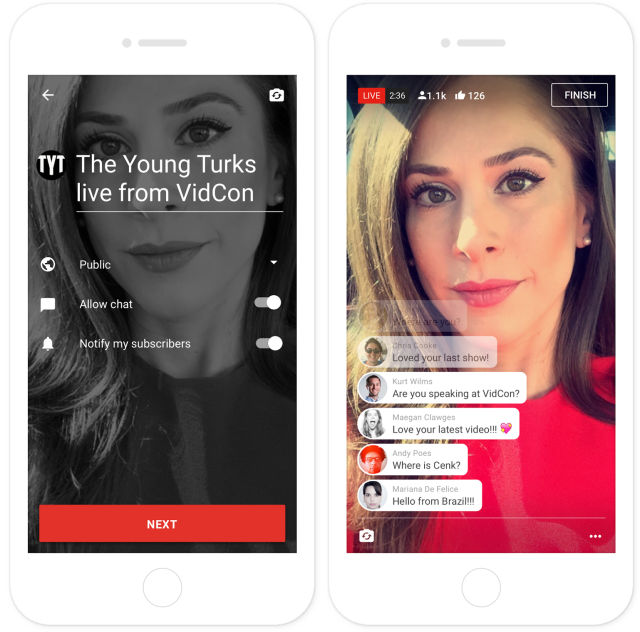 And here’s the thing about live video.

There’s a certain closeness viewers experience with brands through live streaming. There’s an intimate vibe to it.

You can even answer questions and respond to comments in real time and interact with your audience in a way that’s not possible with any other medium.

Research from Livestream also found that

This is definitely something to experiment with if you haven’t done so already.

However, there is one caveat.

You must have at least 1,000 subscribers to be eligible for live video.

But this number has actually dropped dramatically, considering the minimum number was 10,000 earlier in 2017.

What’s one of the quickest ways to crank up the exposure of your blog/website and bring in an influx of traffic?

Collaborating with other awesome YouTubers is basically the equivalent of guest-posting via video, which can boost your brand dramatically.

I’ve had success with this strategy.

Take for instance the time I appeared on Tai Lopez’s channel. If you really want to expedite the growth of your YouTube brand, I highly recommend reaching out to relevant YouTubers in your niche.

Introduce yourself, tell them how much you like their channel and explain your idea for a collaboration video. You don’t even need to do the video face to face—you can record footage, interacting remotely through FaceTime, Skype, etc.

This way, you can leverage someone else’s subscriber base to quickly grow your own following.

It’s really hard to beat YouTube as a brand-building platform.

The massive built-in audience (1.3 billion users as of March 2017) combined with the intimacy that comes with video is the perfect recipe for building your brand from the ground up.

So, competition is still low.

If you can consistently deliver epic content that informs, entertains or both, you’re way ahead of the game.

Not only can you build an audience, you can build a unique, successful brand your competitors won’t be able to replicate.

What methods have you used to establish your YouTube brand?